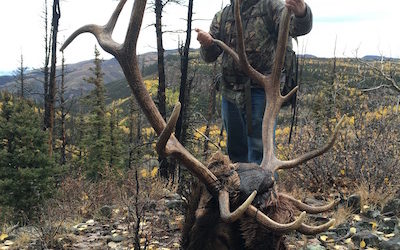 One of the things we like to do as hunting enthusiasts is keep track of all those who use our products and the success they are having. Congrats to Steve Hatch on this great Bull he found late September on the Muzzleloader hunt. What a great hunt and great bull.

Steve spotted this beautiful Bull on Saturday running with a bunch of cows while looking through his Henry Pahvant 8×42 binoculars. He then used a high power spotting scope to get close enough to realize this was a BIG bull and would make for a great hunt.

Needless to say, after watching the bull bed down Sunday night, he was eager Monday morning to get up and find him. But as luck would have it, he was gone. After several days of hiking, glassing and spotting, he finally found him again on Wednesday and made a plan for Thursday morning. He wanted to get within a few hundred yards of the bull to give him the best shot of knocking him down.

Thursday morning came and the bull was exactly where he anticipated. The first shot went off and hit him right in the shoulder. It ran for a little ways and he was right on his trail. 2 hours later after running over fallen trees, and brush, Steve was able to take one more shot and the hunt was over.

This beautiful bull scored 390 and is a magnificent animal. Nice job Steve.

At Henry Pahvant, we pride ourselves in creating some of the best gear for the most rugged and extreme conditions. We as hunters and lovers of the outdoors are always pushing the limits and testing to see what works the best.